As a major pay-TV programmer, the company provides original and purchased content and live events to approximately 3.5 billion cumulative subscribers and viewers worldwide through networks that the company wholly or partially owns. The company distributes customized content in the U.S. and approximately 220 other countries and territories in approximately 50 languages. 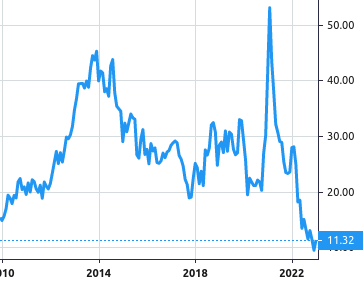 This segment generates revenues from fees charged to distributors of the company’s television networks’ first run content, which includes cable, DTH satellite and telecommunication service providers, referred to as affiliate fees; fees from distributors for licensed content and content to equity method investee networks, referred to as other distribution revenue; fees from advertising sold on its television networks and digital products, which include discovery+, its GO suite of TVE applications and other DTC subscription products; fees from providing sales representation, network distribution services; and revenue from licensing its brands for consumer products.

The company’s television networks are aired pursuant to multi-year carriage agreements that provide for the level of carriage that its networks would receive and for annual graduated rate increases. Carriage of the company’s networks depends on package inclusion, such as whether networks are on the primarily distributed, packages or lesser-distributed, specialized packages, also referred to as digital tiers. Certain of the company’s DTC products, including the recent launch of its aggregated discovery+ service in January 2021, provide dual revenue streams.

This segment principally consists of national and pan-regional television networks and brands that are delivered across various distribution platforms. This segment generates revenue from operations in virtually various pay-TV markets in the world through an infrastructure that includes operational centers in London, Amsterdam, Paris, New Delhi, Warsaw, and Miami. Global brands include Discovery Channel, Food Network, HGTV, Animal Planet, TLC, ID, Science and MotorTrend (known as Turbo outside of the U.S.), along with brands exclusive to International Networks, including Eurosport, Discovery Kids, DMAX, Discovery Home & Health, and TVN. As of December 31, 2021, International Networks operated distribution feeds in approximately 50 languages with channel feeds customized according to language needs and advertising sales opportunities. International Networks also has FTA and broadcast networks in Europe, and continues to pursue further international expansion.

dplay, the company’s real-life entertainment streaming service, is rebranded to its new global streaming service, discovery+. The remainder of the dplay markets, including the U.K., Ireland, the Nordics, Italy, Spain, the Netherlands and Brazil followed in 2021. The company expanded its DTC offerings in 2021 by utilizing its library of local-language content, as well as its portfolio of live sports. Eurosport’s existing streaming service, Eurosport Player, offers localized sports to fans in Europe. This service is expected to continue to be available until discovery+ launches in each market and Eurosport Player's content is integrated onto the service in those markets.

As used herein, a ‘subscriber’ is a single household that receives the applicable network from its cable television operator, direct-to-home (DTH) satellite operator, telecommunication service provider, or other television provider, including those who receive the company’s networks from pay-TV providers without charge pursuant to various pricing plans that include free periods and/or free carriage. The term ‘cumulative subscribers’ refers to the sum of the total number of subscribers to each of the company’s networks or content services. The term ‘viewer’ is a single household that receives the signal from one of the company’s networks using the appropriate receiving equipment without a subscription to a pay-TV provider. The company’s brands include the following:

Discovery Channel creates non-fiction content that informs and entertains its viewers about the world in all its wonder, diversity and amazement. The network offers a mix of production values and cinematography across genres, including science and technology, exploration, adventure, history and behind-the-scenes glimpses at the people, places and organizations that shape and share the company’s world.

In the U.S., Discovery Channel audiences could focus their programming through the Discovery GO app, which features live and on-demand access.

Discovery Channel content is led by various franchises, such as Gold Rush, Street Outlaws, Deadliest Catch, Moonshiners, Expedition Unknown, BattleBots, and Naked & Afraid. It is also known for its blue-chip and natural history specials, such as Serengeti; and is home to Shark Week, the network's annual summer TV event.

Target viewers are adults in the 25 to 54 age range, particularly men.

In the U.S., HGTV audiences could focus their programming through the Discovery GO app, which features live and on-demand access.

Target viewers are adults with higher incomes in the 25 to 54 age range, particularly women.

Food Network programming content attracts audiences interested in food-related entertainment, including competition and travel, as well as food-related topics, such as recipes, food preparation, entertaining, and dining out.

In the U.S., Food Network audiences could focus on their favorite programming through the Discovery GO app, which features live and on-demand access, as well as on the Food Network Kitchen app.

Target viewers are adults with higher incomes in the 25 to 54 age range, particularly women.

In the U.S., TLC audiences could focus on their programming through the Discovery GO app, which features live and on-demand access.

Content on TLC includes the 90 Day Fiance franchise, Sister Wives, I Am Jazz, Dr. Pimple Popper, 1,000-lb Sisters, Welcome to Plathville, Doubling Down with the Derricos, I am Shauna Rae, 7 Little Johnstons, My Big Fat Fabulous Life, Little People Big World, Unexpected, I Love a Mama's Boy, My 600-lb Life, and My Feet Are Killing Me.

Target viewers are adults in the 25 to 54 age range, particularly women.

Animal Planet creates content that keeps the childhood wonder of animals alive by showcasing their stories and the people that work with them.

In the U.S., Animal Planet audiences could focus on their programming through the Animal Planet GO app, which features live and on-demand access.

Target viewers are adults in the 25 to 54 age range.

ID is a major crime, mystery and suspense network. From investigations to riveting mysteries, ID challenges the company’s everyday understanding of culture, society and the human condition.

In the U.S., ID audiences could focus on their programming through the Discovery GO app, which features live and on-demand access.

Target viewers are adults in the 25 to 54 age range, particularly women.

Travel Channel is for the bold, daring and spontaneous adventurers who embrace the thrill of the unexpected, risk-takers who aren’t afraid of a little mystery.

In the U.S., Travel Channel audiences could focus on their programming through the Discovery GO app which, features live and on-demand access.

Target viewers are adults in the 25 to 54 age range.

Programming on MotorTrend TV and the MotorTrend+ App, a subscription streaming service dedicated to the motoring world, featuring the automotive world.

In the U.S., MotorTrend TV audiences could focus on their MotorTrend programming through the Discovery GO app, which features live and on-demand access and on discovery+, the company’s subscription streaming service.

Target viewers are adults in the 25 to 54 age range, particularly men.

OWN is a destination for scripted and unscripted programming from storytellers, with series, such as Queen Sugar, Love & Marriage: Huntsville, Ready to Love, and upcoming dramas The Kings of Napa and All Rise.

Target viewers are African-American adults in the 25 to 54 age range, particularly women.

Eurosport is a household name for live sports entertainment across various platforms, showcasing sporting events with both regional and pan-regional appeal. Viewers in Europe could focus on live-action events, including coverage of cycling's Grand Tours, all four Grand Slam tennis tournaments, as well as various International Ski Federation World Cup and World Championship event during the winter sports season. It reaches various viewers across Europe and Asia via Eurosport 1, Eurosport 2, the network's DTC streaming service, Eurosport Player, ahead of its move to discovery+ in all of its markets, and Eurosport.com, an online sports news and video website reaching approximately 50 million users per month.

As of December 31, 2021, subscribers and viewers for Eurosport 1 included 192 million and Eurosport 2 included 77 million.

Eurosport offers live and on-demand streaming on discovery+ and began integrating Eurosport’s streaming offer in Europe in 2021 and would continue across the continent in step with the continued international roll out of discovery+.

DMAX had approximately 138 million subscribers and viewers as of December 31, 2021.

DMAX is a men’s factual entertainment channel in Asia and Europe.

Discovery Kids had approximately 104 million subscribers and viewers, according to internal estimates as of December 31, 2021.

Discovery Kids is a major pre-school network of Pay TV in Latin America.

The TVN portfolio, excluding HGTV, Travel Channel and Food Network, had approximately 86 million cumulative subscribers and viewers as of December 31, 2021.

The company’s content is sourced from a range of third-party producers, which include various major nonfiction production companies, as well as independent producers and wholly-owned production studios.

The company’s production arrangements fall into three categories, including produced, coproduced and licensed. Produced content includes content that the company engages third parties or wholly-owned production studios to develop and produce. It retains editorial control and owns majority or all of the rights, in exchange for paying all development and production costs. Coproduced content refers to program rights on which the company has collaborated with third parties to finance and develop either because world-wide rights are not available for acquisition or it saves costs by collaborating with third parties. Licensed content includes films or series that have been produced by third parties and where the company does not own the rights. Payments for sports rights made in advance of the event are recognized as prepaid content license assets.

Content networks, such as those owned by the company, are regulated by the Federal Communications Commission, including various regulations that only apply to content networks affiliated with a cable television operator.

The company’s digital services are subject to federal and state regulation in the U.S. relating to the privacy and security of personal information collected from its users, including laws pertaining to the acquisition of personal information from children under 13, such as the federal Children's Online Privacy Protection Act and the federal Controlling the Assault of Non-Solicited Pornography and Marketing Act, and that impose data security and security breach obligations on the company. These laws are continually evolving, with robust new data protection frameworks having been introduced during the past few years in both the U.S. and international markets, such as the California Consumer Privacy Act (CCPA), the E.U. General Data Protection Regulation (GDPR), and Brazil’s General Data Protection Law.

Our ratings and market updates newsletter

Trade on a platform trusted by millions of users

Your funds are kept safe at reputable banks

Fundamental analysis made easy for over 50.000 companies